What’s That NOLA Building With the Smokestacks?

Whether you are driving through the lower Garden District, crossing the Crescent City Connection or taking a ride on the river, you can’t miss this gorgeous example of early 1900s modern factory architecture. It’s been a part of our skyline for my entire life, but as a child I had no idea what the building was used for.

It’s the iconic twin stacks of the Market Street power plant. Built in 1901, the building has been vacant since the 1980s. Plans for redevelopment were put on hold while bankruptcy proceedings were worked out by the owners. It’s been touted as the location for a Bass Pro Shop, for a movie production site, for a mix of condos and retail…none of these have come to fruition yet, but the stacks endure.

In the meantime, the power plant has served as the backdrop on TV shows and movies. It’s like a siren call to graffiti artists, who can’t seem to resist tagging the exterior. There are broken windows and a general air of neglect about her.

She’s slightly the worse for wear, like our residents on Ash Wednesday, but holding her own for now.

See more photos of the plant 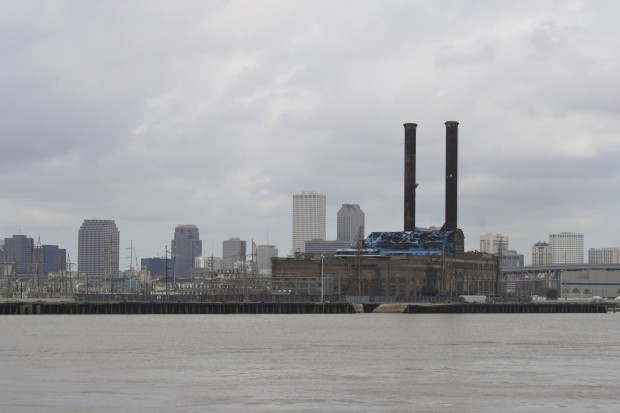