Sometimes a split second decision can turn into a pleasant surprise, and that’s what happened today when I stumbled upon Nine Mile Point Nursery.  I’ve been working in my garden for the last few days and was down to the finishing touches.  There were some spots left that were just crying for something special to be planted in them, so after a lazy morning, the hubby and I set out to Bridge City, intent on going to a large local nursery that has lots of garden ornaments and native plants.  We were disappointed to find them closed.

But as we drove down River Road, we saw a sign for Nine Mile Point Nursery and figured we would stop in and just take a quick look around.  The small sign at the road leading in said that their hours were “When the gate is open”.

Well, the gate was wide open, so we swung in and began creeping down a winding dirt and gravel road that cut through the trees.  Had it not been for more signs that let us know we were on the right path, we wouldn’t have believed that there was anything more to see than sun-dappled trees. 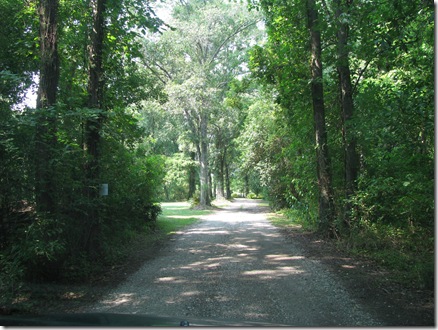 At the end of the road, we came into a clearing with 4 greenhouses, a pickup truck, and a single man weeding out potted palms.  I didn’t expect much when we got out of the car, but it would have been rude to just turn around and leave without taking a look at what they had to offer.  So, we climbed out and were greeted by the owner of the nursery, Brad Naberschnig, who told us that he specializes in gingers and exotic palms.

I initially was a little disappointed, thinking that I wouldn’t find anything that I really liked.  I couldn’t have been more wrong.

Those 4 greenhouses were filled with some of the most beautiful tropical plants I’ve ever seen, including types that I had never laid eyes on before. 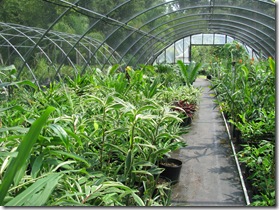 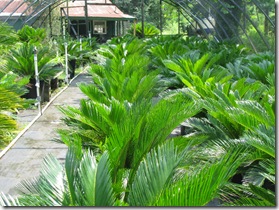 As we began to wander through and ask questions about the variety of plants, Brad fell into step with us, guiding us through the different species, explaining how to propagate pineapple plants, and giving us the names and care instructions for each one we considered purchasing. 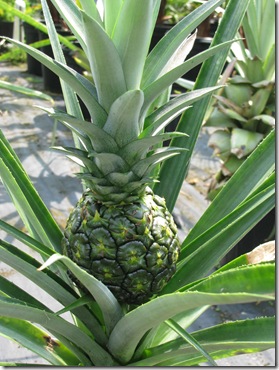 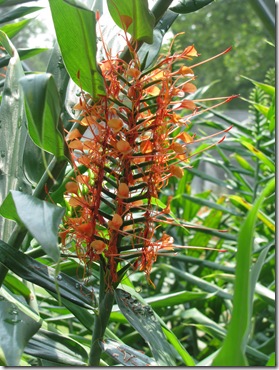 The beautiful blooms were just breathtaking and so different from anything you’ll ever find at one of those do-it-yourself stores where they don’t know how to care for the plants, much less explain them to a customer. 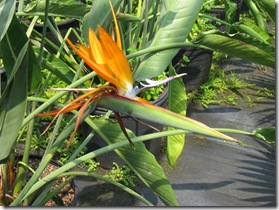 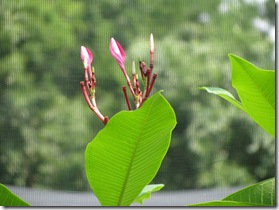 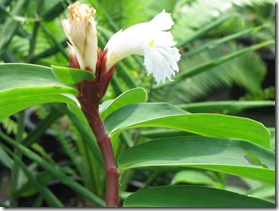 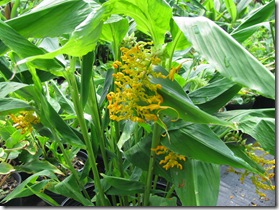 Some of the specimens were even a little scary looking!  This big one below, that I cannot remember the name of, had a trunk covered in little spiky thorns, designed to protect it in the wild from animals that think it’s a good lunch in its native habitat. 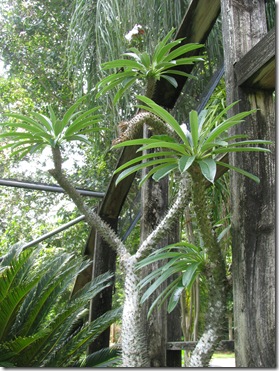 What I originally thought was just vegetation on the property turned out to have a purpose with a closer look.  Brad, who is a licensed horticulturist and landscape contractor, grows his own banana trees, palm trees, and other large tropical plants on the grounds, using them in his landscaping business. 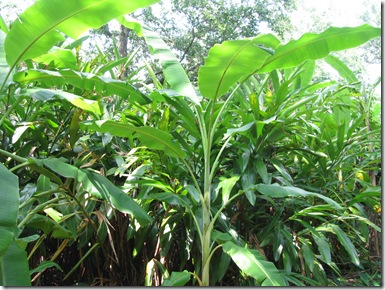 The more we walked and talked, the more I oohed and aahed over it all.  Imagine my surprise when I asked how long the nursery had been there and the answer was the late 1800s!

It turns out that the nursery sits on the grounds of the Magnolia Lane Plantation, which has been owned by the Naberschnig family since 1867.  Brad’s great-grandfather, Frances Quinette, purchased the plantation and shortly afterward established the first plant nursery in Jefferson Parish.  During this same time, he introduced the first St. Augustine sod, strawberries, and citrus plants to Louisiana.  Brad told me that the old-timers at the Strawberry Festival in Pontchatoula scoff at the strawberry claim, but that’s the story that has been handed down for generations.  The plantation was completely self-sufficient, with the first school in Jefferson Parish, its own church, and even a small grocery store. 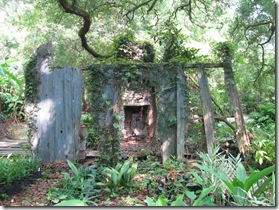 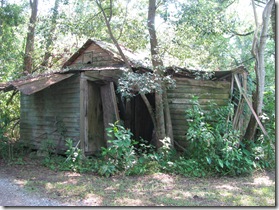 Frances Quinette’s nursery was the supplier of the oak trees that now line St. Charles Avenue in New Orleans.  They were dug up from the grounds of the plantation, hauled by mule to the river, and then shipped on barges to the East Bank.  There still exists a 350-year-old oak tree on the property that became known as The Hanging Tree during the Civil War.  In the course of the war, the plantation was taken over by troops from the North but luckily escaped from being burned like so many others were.

Continuing to walk and talk, Brad brought us up to the grounds of the house and allowed us to look around and experience a little of the history that he gets to live every day.  Although the roof was replaced after Katrina and air conditioning has also been repaired, the majority of the interior is original. 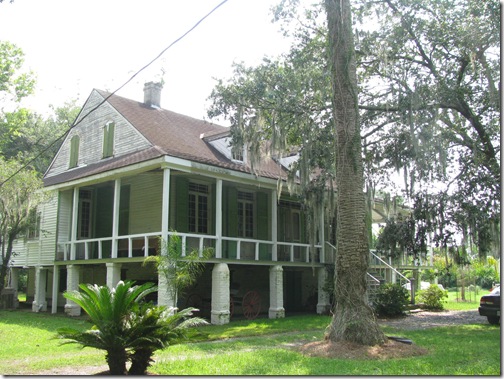 The plantation has been the set of many movies, most recently The Bad Lieutenant starring Nicholas Cage, along with a string of horror movies that sought to take advantage of the mystique that comes from a southern home surrounded by trees dripping with Spanish moss.

Although Brad’s grandmother used to allow tours of the home, today it is a private residence, where the family still sleeps in mosquito netted beds in rooms with walls made from mud moss and deer hair.  The view of their acres of land comes through one of the 880 original hand-blown glass window panes that remain in the house. 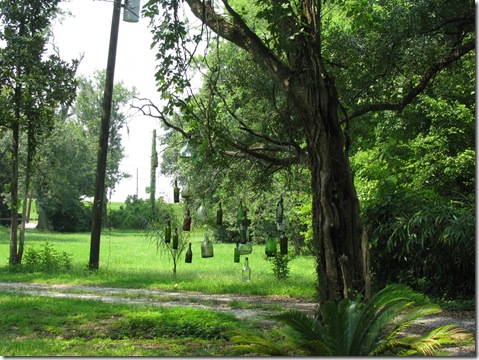 The bottle tree is said to ward away evil spirits 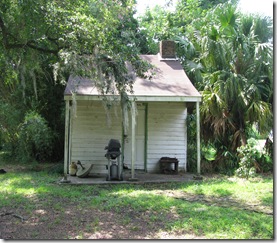 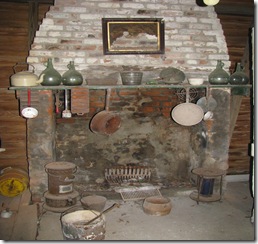 The original kitchen building still houses the fireplace and many of the items used by cooks in the late 1800s.   With a dust-covered wood floor and one single window, I can only imagine how hot it must have been to prepare meals in this little room. 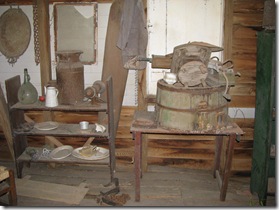 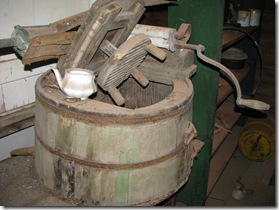 As we made our way back towards the nursery, we passed what I thought was a well, but it turned out to be the original plantation refrigerator – a deep, underground storage space that kept foods cool.  Someone (someone small, I would think) was lowered into the room to store and retrieve food as needed. 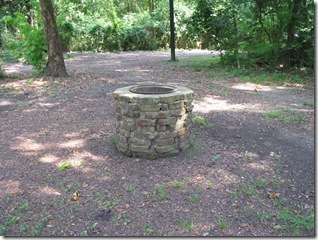 We continued our walk through a clearing behind the house and got a peek into one of the best hiding places on the grounds…a clearing inside the walls of a bamboo stand that has soared towards the clouds for at least 3 generations.  When the wind is blowing, the clack-clack sounds of bamboo ring out across the property. 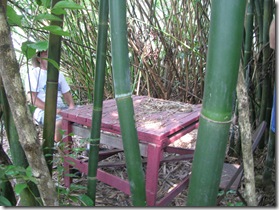 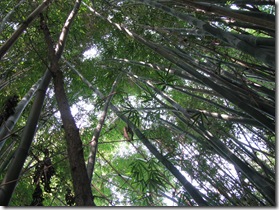 Finally making our way back to our car, we decided on our two favorite plants and loaded them into the back of the car, with a promise for a return visit when we are ready to add to the landscape.

Who would have thought that a simple sign on the road would have led us to an afternoon filled with Louisiana history?   Thank you, Brad, for a delightful visit and tour and for sharing your family’s history with us.

Magnolia Lane Plantation is listed on the National Register of Historic Places and is closed to the public.