Where were the hottest New Orleans West Bank neighborhoods for the month of May 2017? We took a look at sales for the month to find out where buyers in different price ranges are choosing to purchase homes. 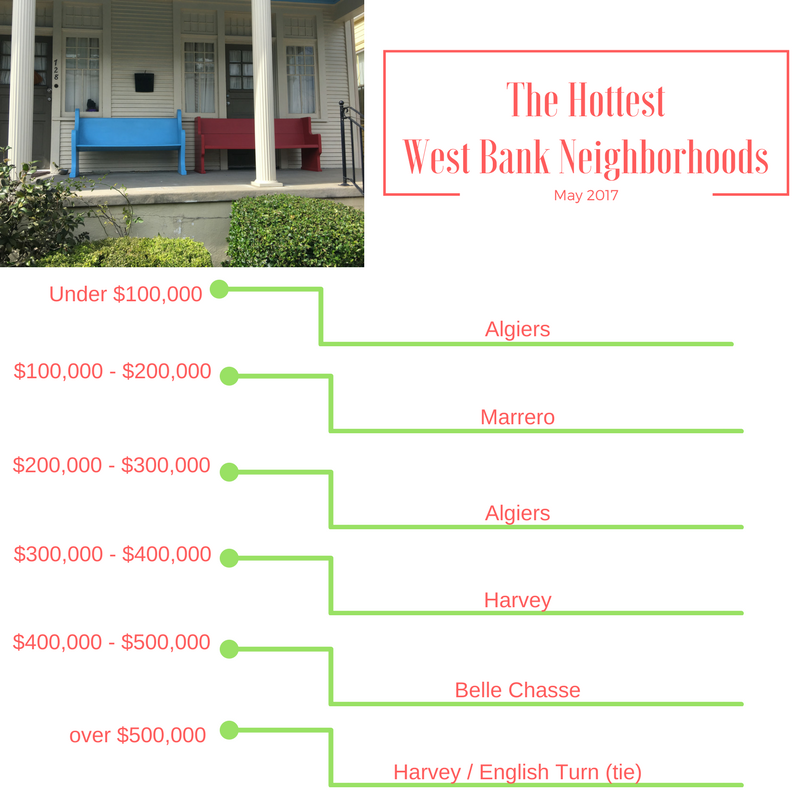 With 41 sales, the under $100,000 price range tied with the $200k-$300k for number of sales. Algiers was the frontrunner with 12 of those sales, mostly in the areas surrounding Federal City.

The most popular price range on the West Bank, there were 102 homes sold in the $100k-$200k range, broken down as follows:

41 homes were sold in this price range in May, with 13 of those in Algiers. The most popular Algiers neighborhood was Park Timbers.

There were 10 homes sold in May in the $300k-$400k price range, spread across the West Bank, but Harvey was the winner in this category, with 3 sales.

There were 5 homes sold in this price range in May, and 4 of them were in Belle Chasse. Springwood Estates was the clear preference by buyers in May, with 3 sales.

With only 2 homes sold in the over $500,000 price range, it was a tie between English Turn in Algiers and The Residence at Park Avenue in Harvey.

We are still of the opinion that the West Bank is becoming more and more attractive to buyers who have been priced out of the East Bank market. They are discovering that crossing the bridge has advantages. Bigger lots. Off street parking. And a heck of a lot more bang for their home buying buck, proven by the diversity of neighborhoods that folks chose in May. See you next month!