When it comes to affordability, the New Orleans West Bank is a well kept secret to those that may just be moving here. But *we* all know that you get more bang for your home buying buck on that side of the river.

The most popular neighborhoods for buyers totally depend on their purchasing power, so we’ve broken out the hottest communities by price range for you. 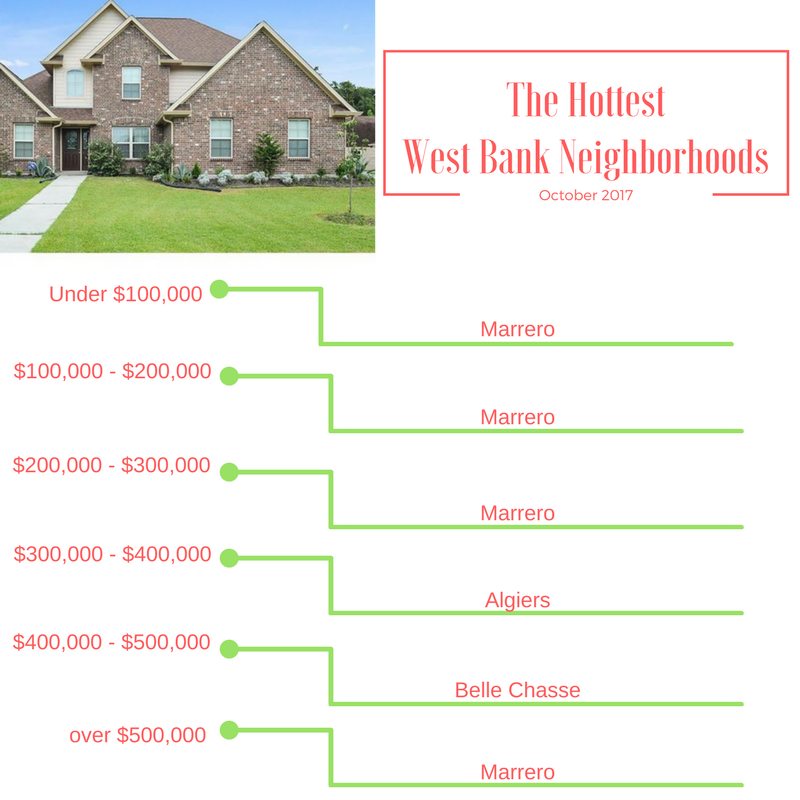 There were 41 homes sold for less than $100,000 in October, with Marrero recording 13 of them. Coming in second place was Algiers. It’s important to remember that, despite how affordable the West Bank is, finding move in ready homes for less than $100,000 can be difficult. 73% of these sales were properties in need of improvements.

The lowest sale on the West Bank in October was 519 Avenue C in Marrero, which sold in poor condition for $17,500

Property condition becomes much, much better when you move into this price range, reflected in the 71 sales in October. The breakdown is Westwego (3), Gretna (7), Harvey (13), Terrytown (14), Algiers (15), and Marrero was the frontrunner with 19 homes sold.

Marrero snatched the title from Algiers in October, with 20 of the 38 sales between $200,000 and $300,000. What changed? New construction. There’s almost none in Algiers, while both Bent Tree and Brentwood have new homes being built and purchased as quickly as the developers can get them done.

Algiers took over the $300-$400k price range, with 6 of the 15 homes sold. Marrero is not a player at this point, and Belle Chasse shows up with 4 sales. You would think that Algiers Point would be the clear preference at this price, but it’s actually split across the 70131 zip code, including Tall Timbers, Park Timbers, and Pakenham Oaks.

Belle Chasse was the community of choice in the $400-$500k price range, with 3 of the 5 homes sold. No one neighborhood had an advantage over another, and all of the homes were resales, not new construction.

The most expensive West Bank home sold in October was 110 Sunflower Rd in Belle Chasse, which had a final price of $465,000

In the luxury market, there were no sales recorded in October. Given that only 15 homes have sold for more than $500k this year, this is not a surprise. We do, however, have an English Turn home pending sale that will break this barrier.

Interested in knowing the value of homes in your New Orleans West Bank neighborhood? Give us a call at 504-327-5303 and a West Bank specialist will be happy to help you.