Where were the hottest New Orleans West Bank neighborhoods for the month of July 2017? We took a look at sales for the month to find out where buyers in different price ranges are choosing to purchase homes.

Algiers was knocked out of the affordable under $100,000 range by Marrero.  Remember, affordable is relative, since the majority of the homes sold for less than $100k were in average, fair, or poor condition. 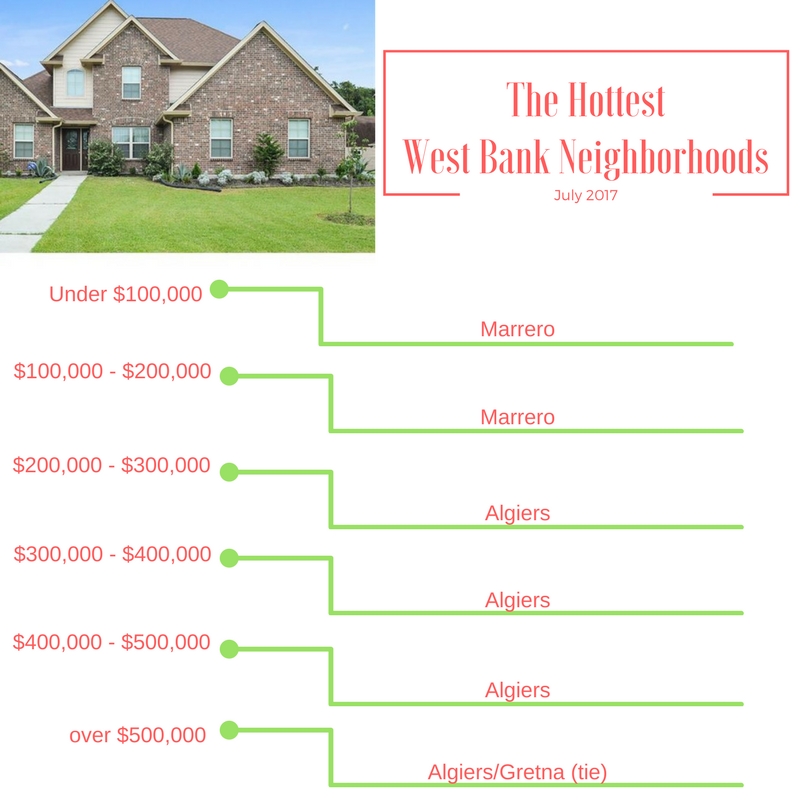 With 45 total sales, the under $100,000 price range was spread across the West Bank, but Marrero had the highest number, ending the month at 12.

The most popular price range on the West Bank, there were 84 homes sold in the $100k-$200k range, broken down as follows:

38 homes were sold in this price range in July, with 13 of those in Algiers. The most popular Algiers neighborhood was Aurora Gardens. Marrero came in a close second, with 12 sales.

There were 8 homes sold in July in the $300k-$400k price range, spread across the West Bank, but Algiers was the winner in this category, with 3 sales (2 of them in Algiers Point).

There were 10 homes sold in this price range in July, and 5 of them were in Algiers (Lakewood Estates, English Turn, Pakenham Oaks, and Algiers Point).

With only 2 homes sold in the over $500,000 price range, it was a tie between the Lower Coast in Algiers and Stonebridge in Gretna.

We continue to hold the opinion that the West Bank is becoming more and more attractive to buyers who have been priced out of the East Bank market, but the areas where more buyers are spending their money are closer to the Crescent City Connection.

New Orleans Real Estate | Disrupting the Industry
Don’t Be Offended When Your Agent Asks You Questions
A Sunday Surprise on the West Bank: Taking The Road Less Traveled to Nine Mile Point Nursery